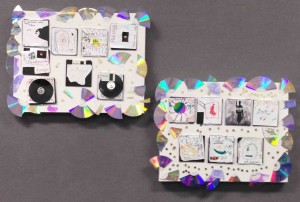 An activity I have done in the past with my class involves the use of old 3.5″ floppy disks that would otherwise be sitting in a cupboard taking up valuable real estate.
My inspiration for this activity came from the work of Nick Gentry . I wont go on and on about it, just have a look at what he does. It’s very impressive.

I started off asking the class what they thought of when I said the word, technology. I’d give them a few seconds to think about it, then we’d jointly construct a mind map on the SMART Board. After everyone has contributed an idea to the mind map, it wasn’t uncommon for others to build on existing ideas later on.

Next, I give each student a 3.5″ floppy disk and with the huge mind map on display, I task the students with designing their idea of what technology means to them onto the disk. I also demonstrate to them my proposed display method, ie, framed, canvas, pinned into a board, etc.

I offered the students some paper sized to the exact shape of the disks to draw their designs and thoughts on. Some students would use thin tip, permanen tmarkers, some used liquid paper, some pulled the physical disk out of the case and put it on the outside and some would print a copy of what they thought of out from the computer.
The latter is not the easy way out. The student still needs to size the image correctly and justify their choice. 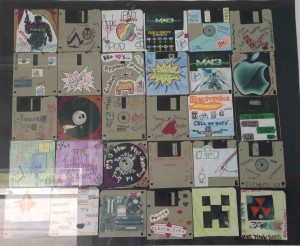 This is work from Stage 3. 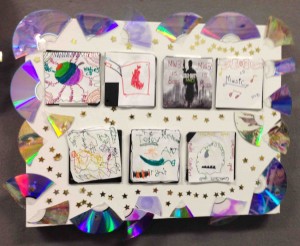 The border above is made of snapped up CDs glued randomly around the side. Snapping CDs was done inside a bag so all small, sharp bits that may fly off would not hurt anyone. Some students decided to use large scissors to cut through the CDs.

A quick side note here; When I explained to the kids what we would be breaking CDs, they thought I was joking. It took a few demonstration CDs for them to come round to the idea. And yes, I did explain not to do this with your CDs at home. 😛

Just having a quick look, technology to students in stages 1, 2 and 3 are video games, social media and Apple devices. The latter has to make you take notice, DEC. 😉