I recently took a group of Stage 3 boys for CAPA. When they asked what we were doing for CAPA, I replied with drama. So many groans and moans were had. I explained to the boys that drama doesn’t have to be boring or uncomfortable. It should be fun and enjoyable – a few actually scoffed at the idea.

So starting off, the boys were not very impressed and were reluctant to participate.
Challenge accepted!!

I start cutting up small pieces of paper and explain to the boys:

We’re going to play a game, but first, I want you all to write a random statement, question, anything on this piece of paper. Nothing rude or inappropriate for school. Don’t write your name on it and do not show it to anyone. Also, please use correct spelling and punctuation. When you’re done, please fold it and bring it to me.

As the papers come back, I check for appropriateness and correct spelling & punctuation. When asked what they should do if they do not know how to spell a word, I give them the option to quickly look it up in a dictionary, or spell it as best as they can phonetically.

I now explain to the boys that we’ll need two volunteers to act out a random scene. I actually got two volunteers quickly for the first round. I point out where the stage area is and ask everyone else to sit around it like an audience.
The scene can be anything (again, not rude or inappropriate for school). I throw out a few examples, but I’d really like some suggestions from the audience. Let the discussions and brain storming begin!

When we have our scene, I give each student a random piece of paper that we filled out earlier – I don’t even know which piece of paper I give them – and ask them not to look at it. I explain that they’re going to improvise (I explain what that word means for metalanguage sake) the scene, but at some point throughout their performance, I’ll call out their name and they have to read what is on the paper and make it fit into the scene. I go on by explaining that your partner has to react to this appropriately for the scene.

By now, most of you would have recognised this activity as one of the games played on “Whose Line is it Anyway?” (British version and American version).
This is what the game looks like from the show: 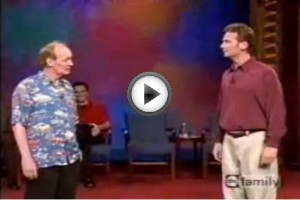 As seen in the game, this game can also be expanded on by letting the students decide when they’re going to read their line.

After each round, I give individual feedback to the performers and a few mannerisms they could look at working on, ie, hands away from face while talking, back to the audience, general shy body language moments, eye contact, etc. I then talked about the audience reaction. From here, I open comments up from the audience.

There are many other games from the show that can be transferred into the classroom with a little bit of preperation and creative thinking.

The boys went from being rather hesitant about drama, to being fully engaged in the activity.

Was this a noisy lesson? Yes it was. There was noise coming from the performers, comments and suggestions from the audience and laughter from both sides.
I explained to the boys that a good drama lesson will have a higher than normal level of noise. It shouldn’t be quiet while taking notes on observations – leave that to art majors and those who wear their cardigans around their shoulders. Get involved, get your hands proverbially dirty, jump in the deep end and have fun doing it.

One thought on “Say Your Line!”