If you don’t understand the language above, then you never played the tabletop roleplaying game, Dungeons & Dragons (DnD).

So, how do I introduce DnD into a classroom? Before I explain, let me outline all of the outcomes I address during this game:

English
Talking and Listening
* Talking in groups
* Listening to narrative, instructions and others
Learning to Write
* Uses knowledge of base words to construct new words
* Introduced to new types of words.

HSIE
Identities
* Demonstrates an understanding of different viewpoints about what is an identity
Cultural Diversity
* Describes the cultural diversity that exists in the world, including the languages spoken.
Relationships with Places
* Evaluates alternative views about the use of natural and built environments
Resource Systems
* Explains how to use money and participates in activities involving the use of money

CAPA
Visual Arts
Making
* Imagines and draws own character.
Appreciating
* Commenting on others’ works.
Drama
Making
* Taking on the role of their character
Appreciating
* Responds to others’ character performances in a fantasy world

I wish there was an easy way to explain how to run a successful DnD… um, Interactive Fantasy Roleplaying Narrative game in the classroom that could simply be followed by reading instructions, but unfortunately, a lot of imagination and quick thinking is needed. I’ll explain how I introduced this game to the class and hopefully this may inspire you to try a game yourself sometime.

NOTE: This is not the full version of the game. I simplified and watered it down so much that it’d make a McDonalds franchise blush.

This was not a one day activity, I spread it over multiple days. I started off by asking the kids if they could tell me what roleplaying meant. Everyone knew what roleplaying was, so I then asked if they could tell me what fantasy was. This was easily answered and referred to by Harry Potter.
I then asked the kids how many of them have read Harry Potter; How many have watched Harry Potter; How many know who Emily Rodda is, and; How many of them have seen The Lord of the Rings. Nearly every hand went up during those questions, so fantasy was easily likened to these sources.

We then discussed some of the characters in these works. Some were magicians, some were fighters and some were archers. I expanded on those examples using this SMART Notebook presentation I made. 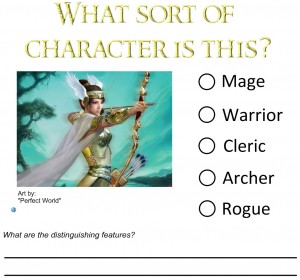 We looked at five different characters and discussed their distinguishing features, ie, why does a warrior wear heavy plate armour, but a mage wears cloth; what does a rogue do and why would they only wear light leather armour, etc.

Next, we looked at some hostile creatures. I decided to only use orcs and bandits to keep it at the fantasy level that the class is familiar with… for now. So no beholders, ghouls, skeleton warriors or carrion crawlers.

To introduce and demonstrate the basics of the game, I asked one boy and one girl in the class to choose an adventurer from the character types (boy went rogue and girl went archer) and I set them off on a quick ‘dungeon crawl‘ where there was a known treasure hidden in the back of a small cave. That’s all they knew.

Here’s how that turned out:
* They enter the dark cave
* Trigger a trap that the rogue failed to spot
* A spiney dart shoots into the archer’s leg
* Rogue attempts to help their friend by pulling out the dart
* Rogue fails to pull it out safely and pricks themself with the dart
* Rogue’s hand starts to feel ‘tingly’
* Rogue panics and attempts to cut their hand off
* Rogue bleeds to unconsciousness by attempting to cut off hand
* Archer tries shaking the rogue, but that does nothing immediately, so they walk off
* Archer finds an old wooden door and can hear grumbling behind it
* Archer kicks door down, surprising a sole orc who is trying to open a treasure chest
* Archer launches two arrows into the orc, killing it before it can get near them
* Archer cannot open the treasure chest, so they drag it back to town to get it opened.

You can take away a lot just from that small adventure in terms of how the students decide to react to situations, how they work as a team, how they assist each other and when faced with an impossible situation (can’t open the treasure chest) they go and get help.

During this entire time, every student in the class was sitting on the floor around us listening intently and whispering some ideas of what they would have done in the given situations. When the orc was revealed, a gasp was heard from the class.
I tell great stories. 😉

The next time we played this, we had six adventurers and they were on a larger quest. The students who were not adventurers got to play the role of orcs, bandits, shop keepers and random characters throughout the story. Everyone was involved and everyone had a wonderful time.

Map based on a verbal description using compass point directions, not drawn on the supplied grid paper. Tisk tisk.

During the game, the adventurers (that had two gold coins each to spend) needed to top up on supplies before heading off. They decided to visit the local shopkeeper and stock up on basics. One adventurer asked the shop keeper if they had any invisible cloaks. Without any prompting, the student playing the role of the shop keeper said they did sell invisible cloaks and sold it to the group for five gold coins. This exceeded their individual limits, so they shared what they had to buy the cloak. They also did this for other supplies that exceeded their spending limits. This group of students were demonstrating team work and mathematic skills. When the adventurers left the shop, the student who was playing the role of the shop keeper wrote the following on a note and handed it to me:

This student wasn’t prompted to do this, he decided himself to do this in the style of the character he chose to play as. The adventurers found out the hard way that the “invisible cloak” they had was nothing but an old rag.

A character sheet filled in early on in the adventure. No drawing on this one. All the ones with drawings were taken home.

I’m not going to go into the entire adventure, but the students go to do such this as:
* Talk to each other in the manner in which their characters would express themselves (English/CAPA)
* Interact with a range of characters in a social environment and react appropriately based on the type of character(s) (English/CAPA/HSIE)
* Plot the best and safest route on a given map while taking into acount the skills of each party member (Maths/CAPA)
* Discuss and decide on the best method to overcome obstacles and encounters (PDHPE/English/CAPA)
* Roll dice or use the iRollDice app or an online dice roller on the iPad to determine their actions, attempts or observations (Sci/Tech/Maths)
* Draw what they believed their character looked like, then showed it to others to see if their ideas matched (CAPA/English)

Playing Dn –  um, Interactive Fantasy Roleplay Narrative was a huge success. So huge it more than justifies the use of bold text twice.

As I mentioned earlier, I wish there was an easy way for you to be able to just read an adventure off of cue cards and play it out that way. Unfortunately, you have to take into account the randomness of your players. What if one of your players decides to go off the designated story line? What if a player asks something that isn’t in the script? You really need to have a good imagination and be able to think quickly to pull this off successfully.

All that said, if you are an imaginative quick thinker, then all you need is a basic idea of what you want your group to do, what obstacles you want to put in front of them, how they could get past these obstacles and what reward you want to give them.
When I rotate different students as adventurers, they base the “winners” as whoever got the greatest treasure at the end. As with nearly everything in this activity, the treasure is based on a random series of dice rolls.

I hope this inspires others. 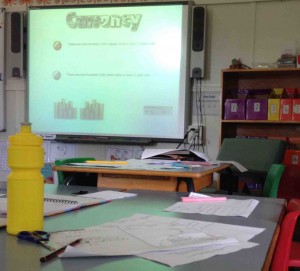