Thar Be Treasure in Them Playgrounds!

Lessons on the Goldrush haven’t seem to change much since I was at school. You’d take an excursion to a gold town, watch video clips of miners and towns, write diary entires from someone’s point of view from that era and even make a diorama on a goldrush theme. Now I’m not saying there’s anything wrong with those, but I did that when I went to school, my nephew did that when he went to school and I’ve seen Stage 3 classes doing that today.

I’d like to throw a new concept into the ‘universal hat’ of lessons and activities when dealing with the Goldrush – turn your playground into a bustling gold field!

You will need to do a little planning ahead of time. What you’ll need:

* A basic map of the school. You should be able to get one of these to copy from your evacuation plan.
* A helper. This may be an S.L.S.O. or parent helper.
* Gems. Many, many gems.
* Individual bags of pyrite. Looks like gold, but it’s “fool’s gold”.
* “Collection bags”. Zip-lock bags from supermarkets will do fine.

You’ll need to have your helper take your gems and scatter them randomly around your designated area when there are minimal amount of students outside. I’ve found this to be best done after the first break.

How you go about introducing this is entirely up to you. The most recent time I did this lesson, I had a few left over gems in my pocket, so I picked a random student to come out the front of the class, gave them one of the gems and asked them to describe what they’re looking at without actually saying what the item is.
This is a great activity on vocabulary, as the student isn’t allowed to say the most obvious thing that comes to them.

After a round or three of descriptions, I ask the class what they think I might be doing with gems in the classroom. I’ve had all sorts of responses to this, but the most common one I get, and the one I’m usually fishing for, is ‘You want to give them to us‘ – there’s always one who will say this. This is when I’ll go into the introduction of the gold field.

I’ll display a SMART Notebook slide of a satellite, overhead view of the school. I’ll ask some students to come up and make notes of some of the areas of the school and label them. There’s a quick navigation and orienteering activity there.
This is just a quick, incomplete example from slide #1 of my Notebook file: 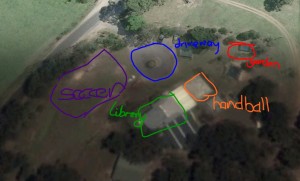 After we get our bearings on the map, I let the class know we’re going to look for gold and gems in the playground. I’ll show them a second slide of the school, but this time, it’s sectioned up into smaller areas. If you do this with your class, you may want to change the number of areas.
This is slide #2 from my Notebook file: 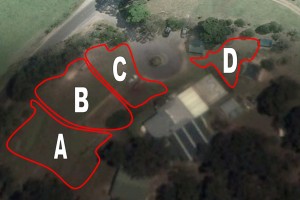 On the day I used this map, I had 17 in the class, so I asked the class to split up into four groups. Each group is given an area to cover, A, B, C or D. We then go through the rules. Besides the usual safety rules, I also include and discuss with the students the rules specific to this exercise.
These are the rules found on slide #3: 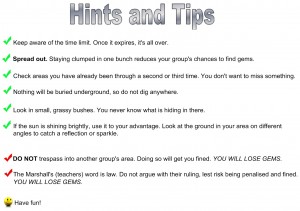 They’re general tips, but the two red ticks at the bottom are focused on.
As trespassing was an issue during the days of the goldrush, I make it clear that no trespassing will be allowed, otherwise they’ll be fined by a removal of gems. Arguing with the “marshalls” also gets your group fined.
To this day, I’ve only ever had one trespass and zero arguments.

Before we head out, I explain that when we’re finished, each group will tally and add up what they’ve found based on a price sheet that will be made available after the hunt.
This is the price sheet I use on slide #4: 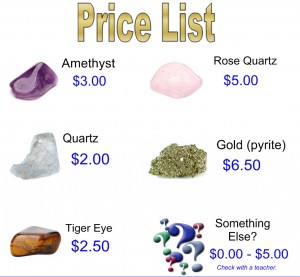 Quick note: This is the second revision of the price sheet I’ve used for this activity. The first two had descriptions of various gems with a number of different solutions. The idea behind this was that the students had to identify their gem based on the descriptions given, then make the decision as to what it was. This turned out to be a great activity, but it was too time consuming so I had to remove the identification section completely and replace it with a picture and name. Of course, not all gems will look like the pictured ones, so the students still need to make an educated guess based on what they’re holding and what the others look like.

Now, during the actual hunt, the kids will work in teams, split off into individuals, follow a few steps behind each other, the number of strategies for maxamising finds is amazing! Some will ask if they can take pictures of their gems to upload to the class blog.

During this time, I’ll patrol the areas making sure there are no issues. Students will come up and show what they’ve found already and make predictions as to what they think they’ve found. I’ve even had one student find a Lego man’s head and wanted to add that to their collection.
I like to keep a seperate collection of gems in my pocket during this time and drop a small number behind me when no one is watching. Any gems taken as fines for trespassing or arguing can also be used for this purpose.

When we get back in, we organise, group and tally up what we’ve got.

Once that’s done, students then use the price sheet from slide #4 that is displayed on the SMARTboard to add up their total findings. When all the groups record their total, I let the class initiate the discussion as to why they got so much/so little. I’ve found they’ve always been proud of their findings and will show off their biggest and shiniest to the other groups.

By now, we’ve covered five of six KLAs:
English: Descriptions and descriptive language, talking and listening.
Maths: Navigation of an arial map, number skills, graphing.
Sci/Tech: Use of SMARTboard, iPads, digital cameras and computer technology.
HSIE: The Goldrush.
PDHPE: Working as a team, being part of a team, movement skills while searching.

I’ll generally conclude this lesson by asking the kids what it was like finding gems & gold (pyrite) and how did they felt when they saw others in other areas collecting more than they were at times. Did they want to risk the trespassing fine to take something that wasn’t theirs? Do you wish you had more people in your team to collect gems for you? I’d review the food, water and hygiene situations from the goldfields during the goldrushes, and that giving the students stale & off food, dirty water, dysentery and/or typhoid was not possible due to me not getting a signed permission slip from their parents. 😛

Thar Be Treasure in Them Playgrounds!
Tagged on: goldrush