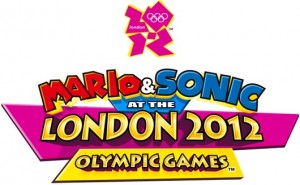 During the 2012 Olympics, I did a really deep, day-long lesson/activity with Stage 3 involving the students teaming up into country groups and competing in Olympic games by playing Mario and Sonic at the 2012 Olympic Games on the Nintendo Wii. I’ll be writing this in brief, point form due to this potentially being a really long and wordy post otherwise.

Let me share with you some digital resources I made:
* Team Application Form
* Event Tokens
* Daybook plan covering the entire lesson with outcomes and indicators addressed. Please have this open in a seperate window to help make sense of the brief points following.

I started off by introducing the day as a focus on simulated movement. I worded it this way because I didn’t want to say, “Hey kids, we’re going to play the Wii today!” and have them get over excited. Yeah, I’m a big, ol’ meanie. So it’s all business as usual and we start.

There are only four teams due to the game being a four player game. So to keep each team participating, I didn’t want to have to have any team sit out a turn.

Teams need to decide what country they want to represent, so they all need to discuss and agree on one, then go and research their flag. The flag then needs to be drawn and coloured onto their team application form. This form MUST be completed and handed in to participate.

Here are our four teams. Their application forms are of varying completion. Name have been smudged out for privacy reasons.

Also on their application form, they need to list the names of each participant, but not use their given name. Instead, each team needs to research the traditional naming methods of their chosen country. So, for example, anyone representing Japan will need to change their name using a Japanese name translator.

On top of the daily, morning routines included in the classroom, this section of the activity could take you to the first break. If not, introduce the sports that you’ll be ‘simulating movement’ to, or if you decided not to tell the class anything about the Wii, you could spill the beans here and let them in on what they’ll be doing after the first break and start setting up the playing area.

This is what our playing area looked like. No one was allowed in front of the table: 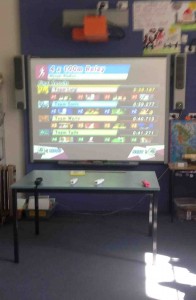 By now, if the class doesn’t know that their ‘simulated movement’ actually involves using the Wii, then let them know.

Introduce the events on offer and give the teams enough time to decide who is going to represent in which event. Also let the class know that the results of each event need to be graphed by one member of each team, as such, at the conclusion of each event, the results screen will be displayed for a short time. This will give students enough time to make a draft of the scores and then decide what sort of graph they want to make. Being Stage 3, they have a few to choose from.

Event tokens are given to each member of the team that is going to represent in that event. I made a point here to the class that they are to hand in those tokens at the beginning of the event. If they lose it, they do not represent. I had no losses, even from the kids who are known to misplace objects regularly.

Students are also encouraged to use audio and video recording hardware to create some pre and post event interviews. This gives the students an opportunity to roleplay an athlete in that event as they envision. Also the interviewer gets to either use their own voice or pretend to be someone else.

Of the events that are on offer, they are chosen randomly by the teacher and the games begin!

We tallied first, second and third places on a large table:

“Medals” were given out to these places. The medals were purchased from Coles Supermarket, but you can get these from any party supply store.

The events should be concluded now. The students are now asked to research an Australian Olympian who represents Australia in the same sport that they represented in. Their research could include their Olympian’s diet, training regime and other interesting facts. On top of this, the students are asked to write a very brief recount/reflection on their performance to compare with that of their chosen Olympian.
This is a quick and brief writing and personal reflection. After this time, we all gathered together to share research and discuss how professional athletes and Olympians practise regularly and have made healthy life choices to get to the level they are at today.

This lesson can also work with other Wii titles, such as Wii Sports and Wii Sports Resort. Not only on the Wii, consider the Xbox’s Kinect titles, Kinect Sports Season 1 and Season 2.

This lesson/activity covered every KLA from our syllabus:
* Graphing in Maths
* Talking and listening, reflections and recount writing in English
* Roleplaying the roles of an interviewer and interviewee for CAPA
* Using a wide range of computer-based technology for Science
* Working as a team and movement skills for PDHPE
* Researching traditions and traditional naming for HSIE

Looking back on this lesson, I’d prefer to see it spread out over the course of a week, instead of one day. Although one day did work, I believe the extra time opens doors to more research opportunities… and more events. 😉