Virtual Reality in My Classroom.

I’m here to briefly share with you how I use virtual reality in my classroom. Well, I have the withdrawal room doubling as a VR room.

The withdrawal room connects both our classrooms together.

The H.T.C. Vive is my hardware of choice. Let’s start with…

Google Tilt Brush. ($US19.99)
3D drawing. Simple. The learning curve isn’t the user interface, it’s actually the mindset of a third dimension. We’re all used to drawing in 2D, but when given the tools and environment to draw in 3D, it takes a little time to adjust. My kids initially took about five minutes.
Below are some examples of their first works. I’m showing their firsts to demonstrate what can be done ‘straight out of the box’. 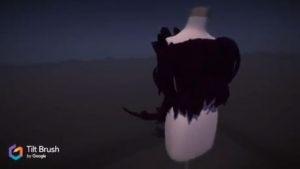 Designing a dress on a mannequin. 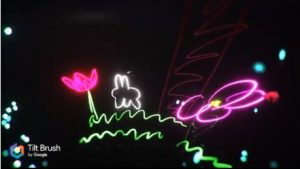 Starting to break out of the 2D mindset.

Mindshow. FREE
It’s 3D movie making in VR. My kids had a look at the backgrounds, characters and props before beginning their storyboards. Once storyboards were complete, the kids went in and made their videos. As soon as you understand that you ‘jump’ from one character to another and record dialogue in layers, the whole process is really easy.
Below are some examples of the kids first works. Again, it’s their firsts to demonstrate what can be done ‘straight out of the box’.

Google Earth V.R. FREE
It’s Google Earth, but in VR. Nothing grand to add here. This is a program the kids generally jump in when they are curious about a location and its surroundings. We’re studying Japan in 2018, so we can expect to be using this a lot in group rotations as a type of excursion/incursion… xincursion? Okay, that’s a thing now!
Xincursion: A structured learning experiences provided by, or under the auspices of, the school which is conducted external, yet internally, to the school site.

Keep Talking and Nobody Explodes. $US14.99
I’m a big fan of games-based learning. It’s a two player game. One person in V.R. with a bomb in front of them, while the other player is in the real world holding onto a defusing manual.
The VR player describes what sort of bomb is in front of them so the real world player can look up which modules need defusing and in what order. The players need to speak clearly to each other, be concise in their descriptions, read accurately and perform well under pressure. Yes, the bomb has a visible time limit on it.
I have yet to record a session of my kids playing this, but it’s always been a fantastic experience, not only for the players, but for the audience.
Fun Fact: Girls have blown up less than boys.

These are just a small handful of educational purposes. I haven’t gone into detail about using underwater experiences such as theBlu ($US9.99) and Ocean Rift ($US9.99), Fruit Ninja VR ($US14.99), room escape games that force the kids to solve challenges and puzzles such as Dungeon Escape VR ($US4.99), museum tours using The VR Museum of Fine Art (FREE) or PALEO Museum VR ($US1.99), experiencing the Kokoda story in Kokoda VR (FREE), tour an Egyptian tomb in Discovr Egypt: King Tut’s Tomb (FREE), or go on a safari in Amazon Odyssey ($US9.99).

Not to mention the collaboration Nick Patsianas and I have been doing between our classes using Vivecraft, but that’s for another time.

Hopefully this will answer a few questions about how VR can be used in a classroom.
Enjoy. 🙂

Virtual Reality in My Classroom.
Tagged on: vr

4 thoughts on “Virtual Reality in My Classroom.”