Bad Piggies was used as an introduction on an activity focusing on potential energy with Stage 3 this week. The game was projected wirelessly to the SMARTboard and a quick descrption was given:

The goal of the game is to help the Bad Piggy get to the map fragment on the other side of the field. To do this, we have to make a contraption to carry him from one side to the other. How can we do using the items given?

This was the field and the pig was stuck on top of the mountain in the top left corner. 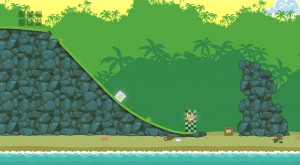 These are some of the designs the kids came up with using the given items.

All of the designs either made it to the end or crashed on the way. After each crash, the student was quick to correct their error by either placing the weight of the pig in a different location or to balance the design evenly. This opened up discussions on center of gravity, weight distributions and symmetry.

We then tried another level. 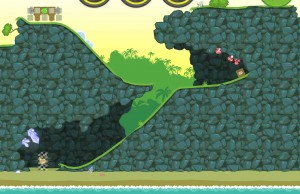 This time, the Bad Piggy needed to have a contraption to carry him in two different directions.

I explained to the class that they were going to design and create a contraption of their own to travel from one side of an area to another. I showed them a blue shell pool similar to this, that will be filled with water (who doesn’t love playing with water?) as the area that they’ll be travelling. I also added that they’ll need to design their contraption strong enough to carry the load of one, two or three Bad Piggies.
These were purchased from Toys ‘r’ Us for $AU6.00 each. They are made of solid plastic.

Here are the materials that were on offer: 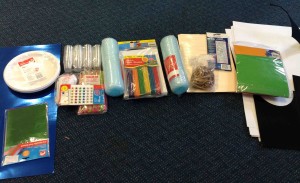 Yes, that is a packet of stars. Stars make things go faster. 😛
After a last second Q’n’A regarding expectations, I gave the class the option of working either in groups or alone. Four seconds later… 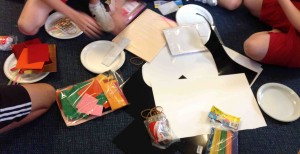 There were many different designs made throughout the day. Students were given the option to research their design online as well.
I set up the pool outside the classroom so the kids could test their designs to see what needed more work. There were many revisions and complete restarts.
Without making this a really wordy post, I’ll just let some pictures and video do the talking.

Here are some videos of the final products. Not all were successful, but the learning was there.

So I did an activity with a focus on potential energy. Introduced by using the game, “Bad Piggies”, discussed what potential energy is, which then led into a hands-on create and design task to make a contraption to carry a pig from one side of an area to another – just like in the game.

KLAs covered were:
Maths – Weight, measurement, estimation
English – Talking and listening. I also wanted the students to draw and label a blue print to their design, but time got the best of us
Science – Potential energy, machines, using technology
PDHPE – Working as a team
CAPA – Creating a 3D model

All of the kids were really engaged in this task from beginning right to the end. We did our final test at lunch time and students from other classes watched on and were really excited by the moving boats and pigs.
With this level of engagement, you can really tell what sort of workers the students are based on this task – either the leader, solo artist, all-rounder, order-taker and order-giver.

You can’t get this kind of personal assessment from a pen and paper test. Also, when was the last time someone asked, “Where’s the pig?” in a classroom? 😉