The Apple and the Adjective.

I’ve been asked to do lessons on adjectives, both as introductions and revisions, for different classes. What I’m going to show you here is how I went about doing this. For this lesson, I needed my iPad, AppleTV setup, a SMARTboard and a standard whiteboard.

Prior to the lesson, I will draw a very basic picture of a stick figure looking up at a tall tree that has an apple hanging from it. 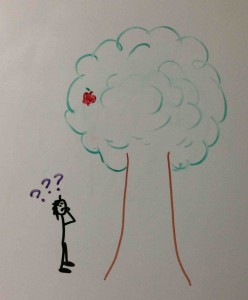 I’ll have the class split themselves into groups of between four and six, then I give each group a half A4 sheet of paper with the following instructions:

I want you to pretend you are the stick figure. You can see an apple that you would love to eat, but it is out of reach hanging from the tree.
You have the ability to magically make anything spawn out of the air to help you get the apple just by thinking about it.
Your task is to make a list of as many things as you can imagine that will help you claim the apple. Be descriptive, use many adjectives.
There are no limits or restrictions on what you can conjure.
Go!

Generally when I tell the class there are no limits, many cheeky grins will appear on their faces – mainly the boys’ – then they all huddle down and get to work on their list. I’ll generally let this section of the lesson go for around five minutes, depending on the level of discussion in and out of the groups on their lists. If you do this, be prepared for a lot of colourful and creative discussion.

Now that the lists are made, I explain to the students that I am now going to replace the tree with a digital tree, the stick figure with a character named Maxwell, and the apple with an item called a Starite. All of this is said while starting up Scribblenauts.
I start up the game, AirPlay it to the SMARTboard so now the puzzle has gone from a stick figure looking at an apple in a tree, to this: 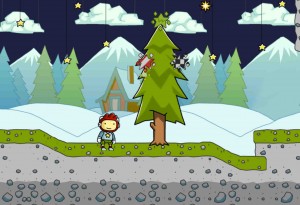 After a brief description of how to play the game, I’ll ask one member from each group to take turns using the iPad to share and demonstrate to the class what their group came up with for the puzzle. For each solution, I’ll write it on the board and if it works in the game, I’ll give it a small tick. If it doesn’t work due to a restriction of the game’s mechanics, we have a quick discussion in-class to see if it would actually work in the real world… if magically conjuring items was real.

During all of this, I keep the focus on adjectives. Always asking the groups (and class) if there are any describing words they could add to make their idea better.

Here’s a quick recall of a most unusual idea that has come up in this exercise:

Group: We chose a flying bathtub.
Teacher: Great! So what was the adjective you used there?
Group: Flying.
Teacher: Can you add any more adjectives to your idea?
[The group huddled for a short time]
Group: We’re going to change it to a large, winged, flying, blue bathtub!

You know what? It actually worked.

One thought on “The Apple and the Adjective.”