Mid this year, I did a block of work as an ICT teacher for students in Kindergarten to Year 2. A personal project I decided to take up was to decorate the computer room’s door with something, because as it stood right now, it was bare and blue – there was nothing on it that said, ‘Hey, this is the computer room’.

So the kids from Kindergarten to Year 2 and I made this: 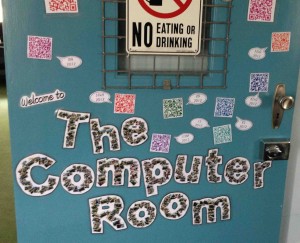 So what’s on the door? The large title, “Welcome to the Computer Room” and QR codes of a class recording.

The title was made using the iPad and an app called, Shape Collage ($1.99). During my time of this block, I took random, candid pictures of the students working on their weekly tasks. The kids were welcome to take some themselves if they desired – which they did.

Using the Shape Collage app is very simple, too. All that you need to do is to select the pictures you want in you collage, the shape of the collage then let the app do the rest. Although the creation of the individual collage in itself is easy to do, making the entire sign was rather time consuming as it was made letter-by-letter.

Next was the creation of the QR codes. QR codes are barcodes that, when scanned with a scanner on a smart phone, will display or play the information that is linked to it. In this case, I had audio recordings linked.

I organised for each class to record the message, “Welcome to the Computer Room!”. This was recorded with the Audioboo app which I then uploaded directly to Audioboo’s site from the iPad.
Next, I went to a QR code creation website, qrstuff.com, where I linked my audio and gave the QR code a unique colour.

With the welcome sign and QR codes all made, I then printed them out, laminated them and stuck them on the door. To this day, months after its creation, the students who were involved in making the sign still point out to their friends from other classes, and their parents if walking by, where they are in the letters.

A quick note before finishing up; I understand there are many collage apps on the AppStore, some of which are free, but this is the one I used and therefore linked it as such.