I’d like to introduce you to a pretty deep lesson I do using the iPad game, Outwitters. This is a lesson I have used with students from Kindergarten right up to Year 6.

Before I start, let me briefly describe to you what Outwitters is all about. Outwitters is a strategy game for iOS that is a cross between chess and checkers, with a combat system similar to some traditional table top RPGs, ie, hit points and damage. Each game is played on a themed map, and the goal of each game is to destroy your enemy’s base while defending your own, building up your army and decimating your opponent.
There is a lot of strategy involved in the game and I did say I would only briefly describe it. Outwitters is a free download, so if you haven’t got it yet, have a look at it. It’s worth the time.

There are a number of game boards available. Here are two: 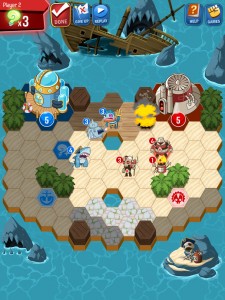 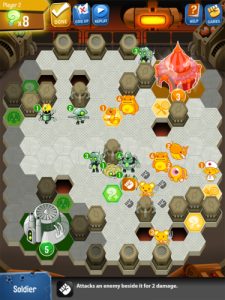 So how did I manage to work this into the classroom? Take a look: 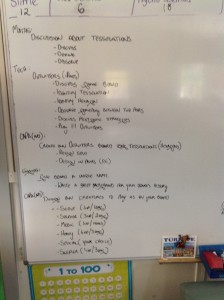 Mind my scribbly handwriting and the spelling error, but to save me having to type up a whole wall of text and to save you having to read it, I thought it easier just to post a picture of my lesson note from the white board. Yes, this was on display for the class to see, and yes, it was meant to look like we were doing a boring lesson. They were wrong.

A quick note here on the “observe gameplay between two peers”; I AirPlay the iPad to the AppleTV which is projecting onto the SMARTboard. I then send two students to a separate part of the room (be it just outside the room or an empty neighbouring room), they play while the rest of us observe and have quality discussions on their strategies. We’ll comment on their moves while discussing and justifying our opinions. When the game is over, I let the kids have a minute or two to discuss between themselves and the players about what they saw and how they would have executed it differently… of course, this is easier for us because we could see both sides of the game.

Back to the whiteboard picture, as you can see:
* We started off talking about tessellations
* Which moved to some tessellation examples
* Eventually looking at some Outwitters’ game boards
* Then the kids paired off to play some games (We had enough iPads for one between two)
* Created our own game boards by tracing around wooden hexagons
* Gave our game boards a name that matched the theme that was being designed (We had ponies, lollies, skeletons, machines, and a whole lot of others)
* Wrote a brief story background to our map, ie, where it came from and what can be found on it
* Designed and created our own pieces that suited the theme for the game board and still met the roles from the original Outwitters. (I didn’t know there could be so many breeds of war ponies!)
* Finally, we all played on the game boards.

The creator of each game board stayed with theirs for a while to describe what was going on in their map design. I’m sure you can imagine the discussions and conversations that were going on during this part alone.

Here is an almost completed work sample from a Year 5 student: 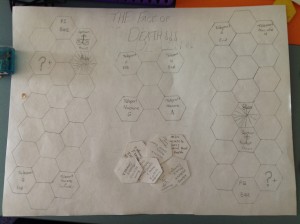 So I addressed four, possibly five (PDHPE if they worked in groups) KLAs in a lesson that really was focusing on tessellations. If you get an opportunity and have the resources, try it out. The kids loved it and the class now have some game boards to use for those rainy days. 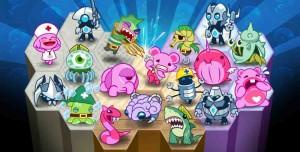